I started out this academic year with very vague notions of what I wanted to accomplish. I wanted him to get “better” in Chinese, but what exactly does “better” mean?

The last few months have been bumbling along trying to balance reading that is neither too easy or too hard, as well as Simplified and Traditional, Pinyin and No Pinyin.

But I think I finally have a plan. And having a plan makes me happy. Even if I don’t check off all of my goals, so what? We will still have accomplished a lot.

Currently Little Man reads books with Pinyin fluently, ~130 characters per min when reading aloud. I think he has made really good improvement in this area because he used to read choppily and pause in all the wrong spots, like right smack in the middle of a 成语. Lately I’ve noticed that he pauses correctly, which is I think mostly due to his improved comprehension and language skills.

His Zhuyin reading is much more hesitant and has errors. I would say he can read Zhuyin probably 80-90% accurately and speed is on the slow side. He is also slow at reading vertical print. I have not measured his reading speed but I’m sure it’s less than 100 characters per min and I’ll really like to bump it up for him to read Zhuyin as fast as he reads Pinyin.

Character recognition is really pesky and annoying. The last few months I got super annoyed and frustrated with his forgetting previously learned characters. And some of them are not even hard ones, mind you. They were characters that he learned in 四五快读 but because he hasn’t seen them in a while.. poof! They’re gone.

Essentially what was happening was that he seemed to forget characters as he learned new ones, the result being that we were STUCK at 1000+ characters and it didn’t feel like we were moving forward and possibly even moving backward. The horror!

But I have since calmed down after realizing that this is totally normal brain 🧠 function and there is a lot of research showing that forgetting is part of remembering. What? Crazy, I know.

A month ago we started using a systematic method of a Leitner box (Spaced Repetition System) to improve memory to a reported 95% retention rate. I won’t go into the specifics because this webpage explains it extremely well and you should read it if you’re interested. 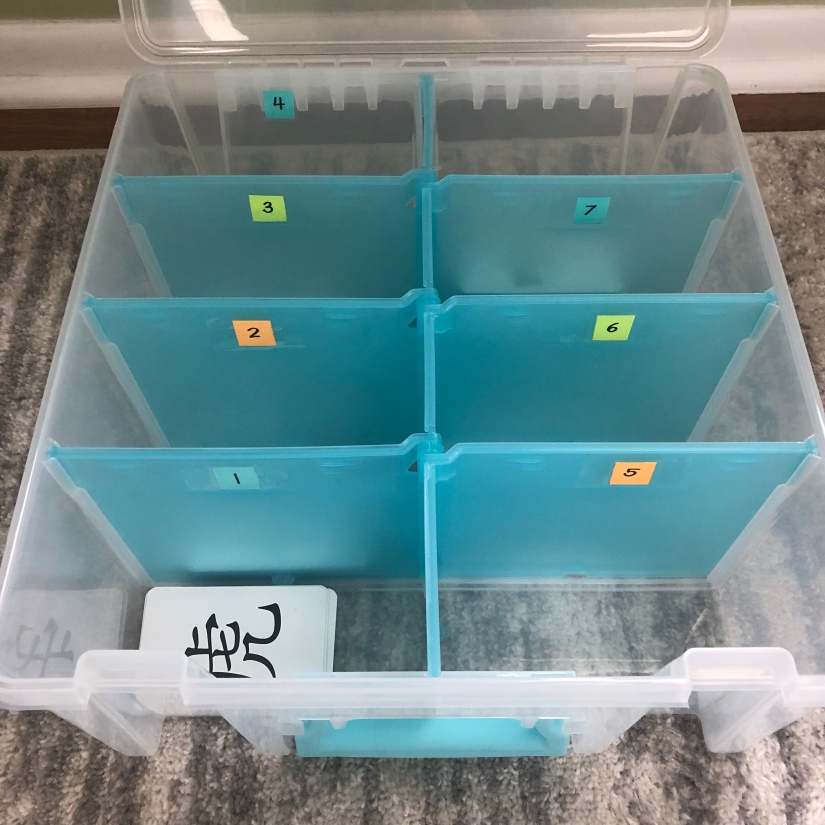 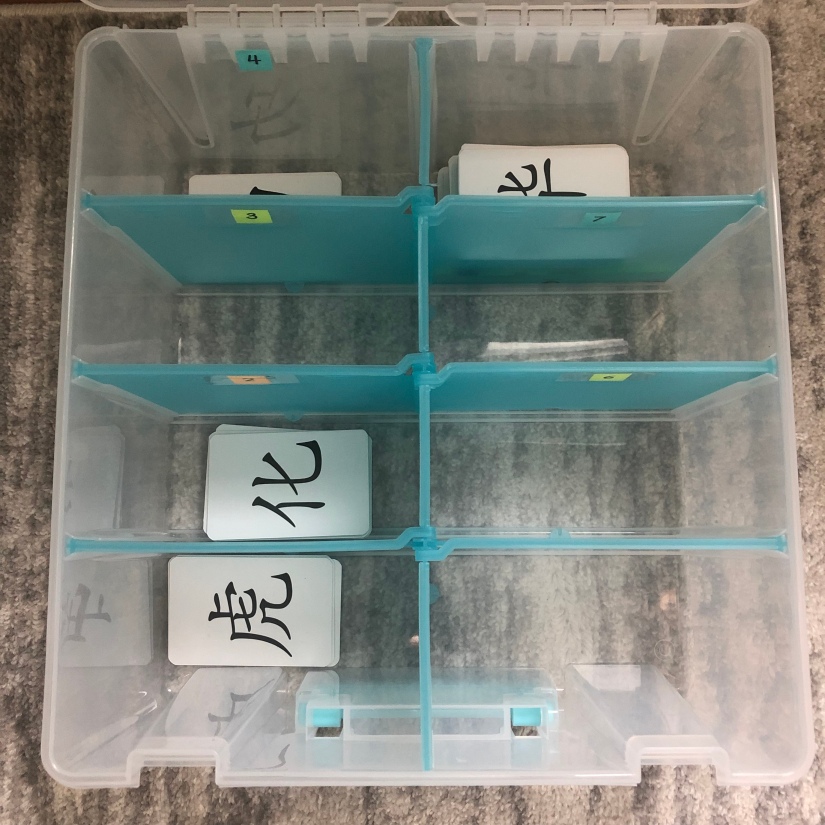 There are digital versions of this out there, such as using the Anki program where other people have already created digital flashcards of first 3000 or 5000 Chinese characters. However I decided to go the old-fashioned way and use paper flashcards. Part of the reason is that I already bought 1500 flashcards from Taobao that I should put to good use, and the other reason is for 6-year-old, I think it is beneficial to have the “hands on” component of holding, touching, seeing, feeling.

Instead of making my own Leitner box, I bought a craft storage container from Amazon. All I had to do it label it from 1-7. It is huge and roomy for hundreds of flashcards! Then I printed the revision schedule online and taped it to the box and we highlight what day we’re on. 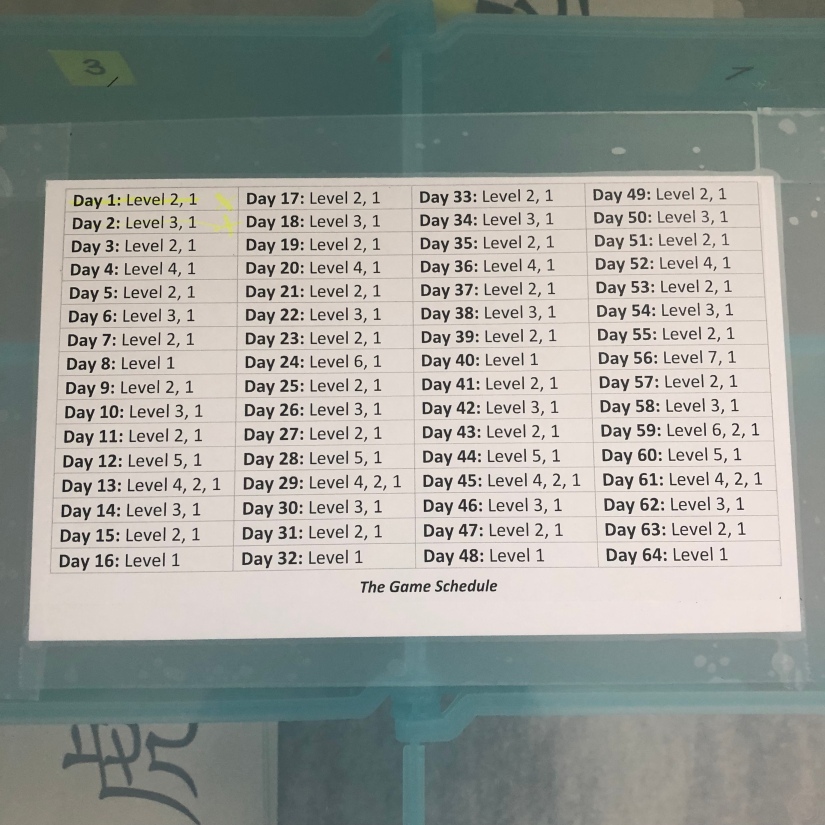 We do 5 characters a day and assuming a retention rate of 90%, we should be able to master 1642 characters a year. Presumably then he can get to 3000-4000 characters by 2nd grade and be able to read fluently without phonetic assistance, which is particularly important for Simplified Chinese since there is no pinyin in all the books from China from 3rd grade and up.

I explained the basic principles of the Leitner box to Little Man so he understands the theory behind it. He has also assumed some of the responsibility to review the characters by himself. Since there is pinyin on the back of the cards, he is able to test himself and check if he’s right. This has been a really nice step for us – me letting go of micro-managing and him stepping up with independence.

In case you’re wondering, we are doing only Simplified characters. The reason for this is that Simplified and Traditional are 70-80% exactly the same, and even the 20-30% that are not the same are very similar looking. For myself and most of my friends who grew up in Singapore, we all learned to read Traditional Chinese not through any formal teaching but simply by osmosis from watching TV, reading song lyrics, etc. Little Man has exposure to Traditional Chinese through books and weekend Chinese school, I feel somewhat confident that he can learn it via exposure as well.

Obviously it is too early for me to gauge the success of this method, but it is going well so far. I just have to be patient, patient, patient, and continue trudging along bit by bit, every single day. I will report the results in a year’s time! 😉

View all posts by McG

2 thoughts on “Chinese Goals for the Next 1-2 Years”

I created this blog to share resources for young children to learn Chinese language and culture.

I would love to hear your comments and feedback!