We are having so much fun in the sun and I have been so lazy to blog. But here I am, finally got off my lazy *** to share some of our favorite 西游記 materials for beginners. These materials are abridged for preschool/early elementary age and are introductory level, so don’t expect it to include all the details. The main purpose is to hook kids’ interest.

I’ll start out by saying that I had no interest in Journey to the West when I was a kid growing up in Singapore. I remember it being on TV and my thoughts were that Monkey King and the Pig looked sooooo fake and dumb. I especially hated how Pig’s ears looked glued on and his big belly and man boobs are so ewwwww. 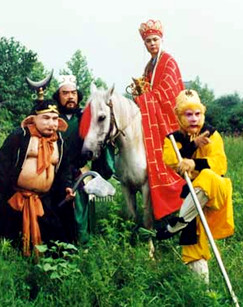 Anyway, things change when you get older right. Especially after you have kids. It’s like you have to force yourself to do things you hate, and then realize that it’s actually not so bad after all. (Am I the only who feels this way?)

Why Read Journey to The West?

I’ll share what we used in the chronological order that we acquired them.

This was my son’s very first introduction to at 5 y.o. and I think it was a great choice because he was jaw-droppingly WOWED by the stunning illustrations and pop-ups.

Unfortunately, I found it difficult to read this book since it didn’t have pinyin and I wasn’t familiar with the character names (although I could probably read it now). My son was also afraid of the “spider” page. As a result he only requested me to read only the first two pages of this book over and over. As I later found out, the first two pages tell the story of 大鬧天宮 (Havoc in Heaven) which is sometimes told as a stand-alone story, so I guess it turned out just fine.

Regardless, this book was the beginning of his interest in Journey to the West so it served its purpose. It really is a lovely book.

I really recommend these YouTube videos produced by Little Fox Chinese because it’s free, well produced (not crappy homemade videos), and short! Each video is only about 5-6 minutes long and easy to understand, perfect for short attention spans. Little Fox Chinese even has the companion printable books and MP3 for download on their website if you sign up for an account. We didn’t do this because, you know, lazy. 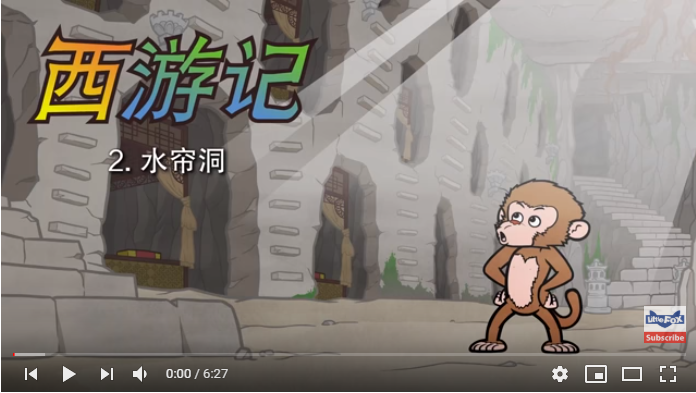 These videos really helped my son understand the story. Little Fox is made for Chinese language learners so the language is by far the easiest to understand of the whole lot. This is a great introduction for kids.

This book comes in Traditional Chinese (buy from 博客來) or Simplified Chinese (buy from Taobao). What I like about it is each chapter is really short, only about 5-6 pages, so it was manageable both as a read-aloud and for kids to read themselves. The pictures are cute and I like them far better than the numerous other versions out there with ugly pictures. 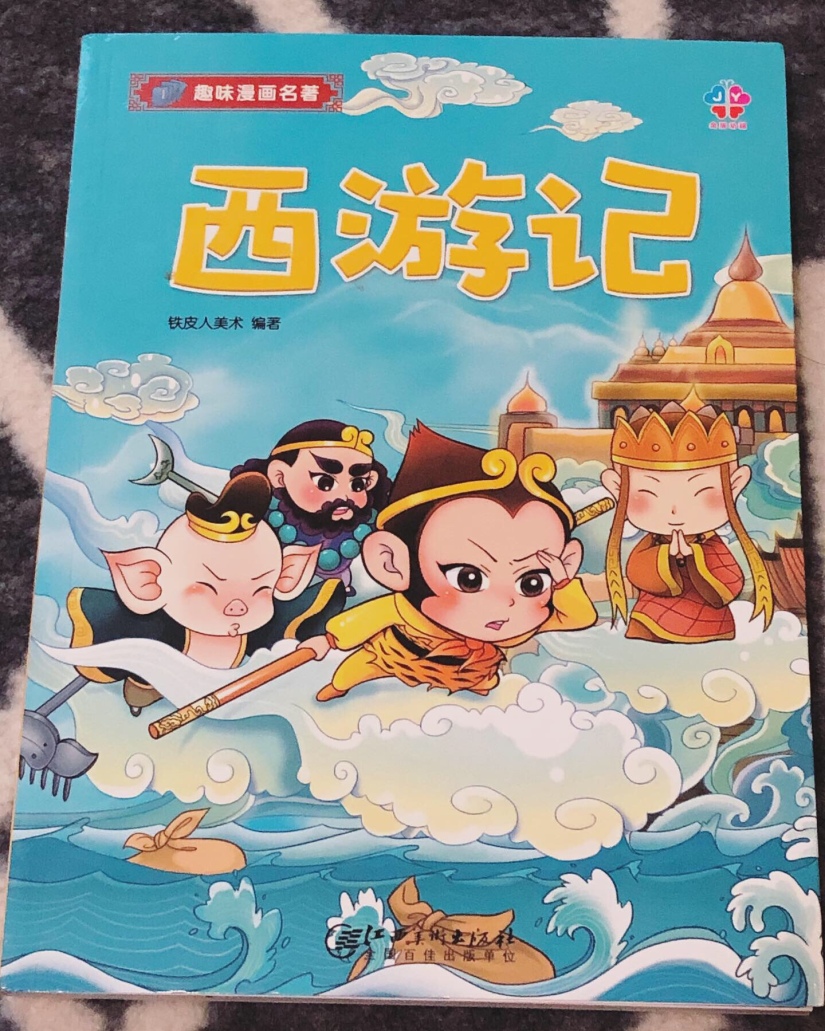 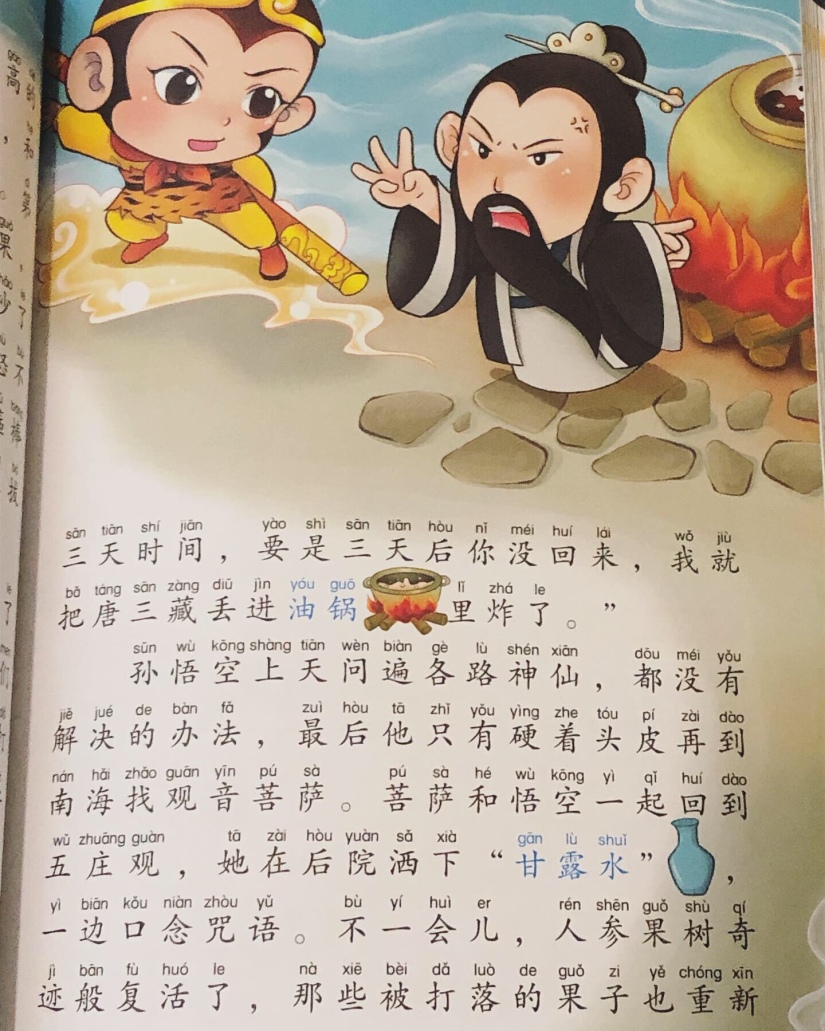 The story is summarized (a bit too summarized in my opinion) into about 120 pages and a lot of details were left out. But, I definitely feel like it was a worthwhile buy since it was only $2 on Taobao. 👌 This was easier for me to read aloud to him since it has pinyin!

Link to buy here and here

This is an award-winning audio narration from Taiwan and highly recommended by many parents. I bought it when my son was ~5.5 and we only listened to a bit before he lost interest. It was probably too long and complicated for him at that time.

However, he suddenly picked it when he was 6.5 years old and this time he loved it and listened to the whole thing (12+ hours) in the car over several weeks. Goes to show that sometimes we just have to be patient and wait for kids to be developmentally ready.

Note that this is not an audio book (where someone is reading out a book), but more like an 廣播劇 audio drama (with a narrator and actors acting out parts). There is a lot of sound effects and clinging and clanging and overall very LOUD. I did not like it at first but got used to it after a while. It has a lot of advanced vocabulary and idioms and we both benefited from listening to it.

Shortly after listening to #4, my son picked up the book (listed in #3) and read it. I was beyond thrilled! I just wanted to point this out because it is evidence that listening leads to reading. Having your kids listen to the audiobook first will build their vocabulary and comprehension enough that they can eventually read the book.

Mi Xiao Quan is a hugely popular series in China, the equivalent version of Wimpy Kids. I’ve mentioned numerous times how much my son loves Mi Xiao Quan, starting with the original books and audiobooks, then the other spin-off series like idioms and riddles. I recently realized there’s yet another spin-off series Journey to the West.

Unlike the Diary of Mi Xiao Quan audiobooks which are free, the Journey to the West audio cost about $12 USD. Well worth it in my opinion as it is extremely well produced. In the introduction they stated that the author spent six months writing it and they found the best voices in China to record and the best producers for the music.

I absolutely ❤️ it. I like it even better than #4 You Fu CDs listed above because they do a good job of providing lots of details and descriptions. It also includes interesting snippets from the unabridged 原著 Journey to the West – e.g. asking “Do you know how tall the Monkey King is?” then quoting that it says that he is not taller than 4 feet tall. What a good way to introduce kids to the unabridged version!

It is also more “modern” – it is a recent production so the music and sound effects are toned down, not as “old fashioned” as You Fu CDs which were produced in 2003. Nonetheless I think they both have their merit and I don’t regret buying them both.

And… that’s all I have for right now! I am looking for more intermediate-level books and will update more as we get to that level.

View all posts by McG

I created this blog to share resources for young children to learn Chinese language and culture.

I would love to hear your comments and feedback!